Please feel free to review some of our articles featuring Hallak Cleaners, Fashion trends and clothing care tips. If you have further questions, please do not hesitate to contact us directly at Info@Hallak.com

When Your Dress is a Mess

A wedding gown’s journey down the aisle – and after its Big Day.  Presented to you in a beautiful wedding blog by the owner / designer of Headpiece.com.

Coutures Give Nod to Cleaners 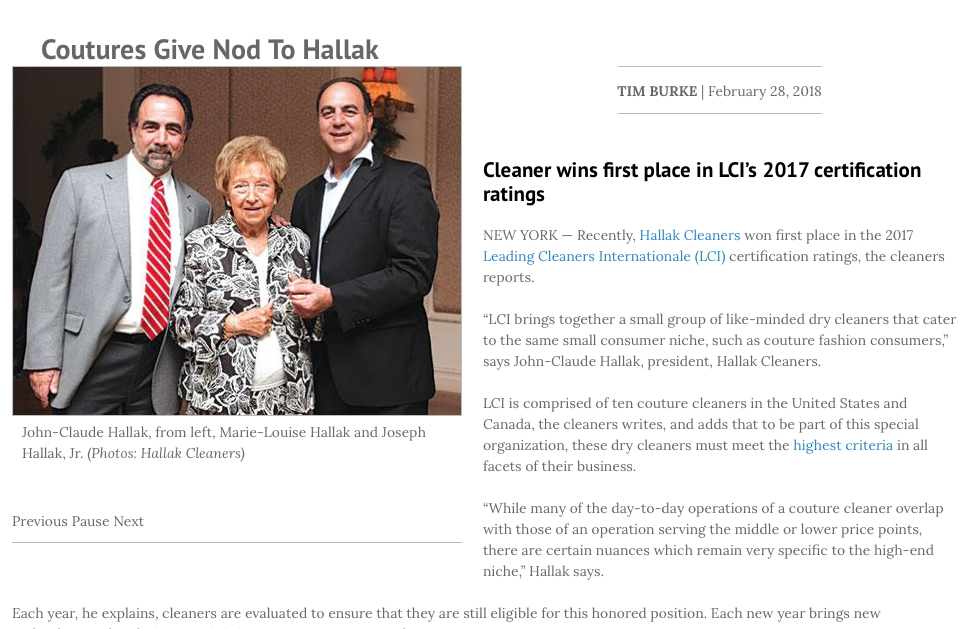 Never Ruin Another Piece of Hard-to-Clean Clothing Ever Again

Joe Hallak was recently featured in an article about hard-to-clean garments.  The key to safe cleaning is in the proper knowledge of the various processes and solvents. 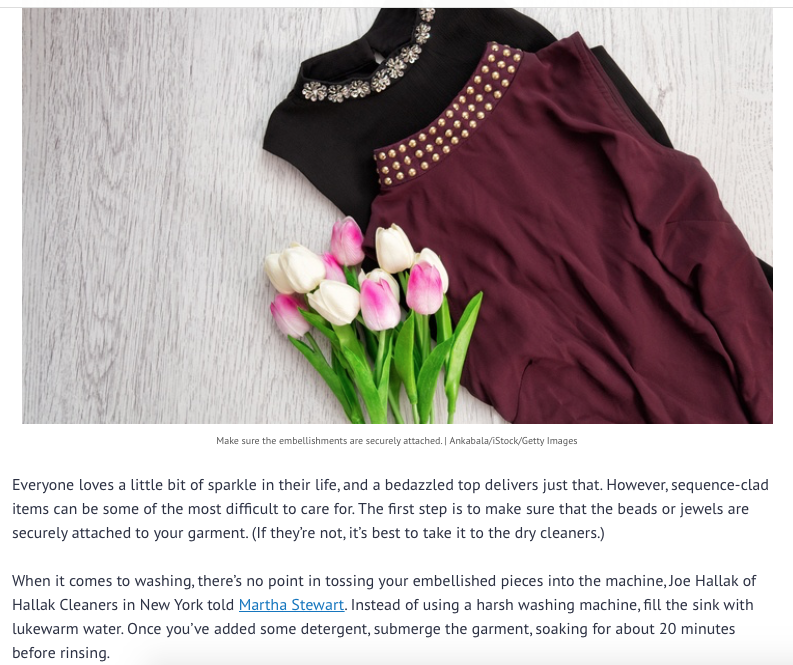 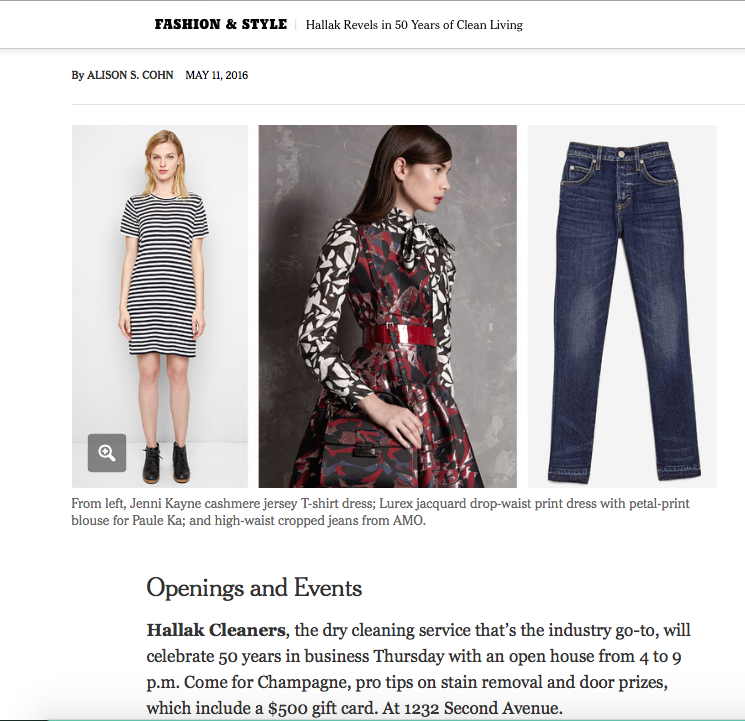 Spin It to Win It

“Making healthier profits is the goal of many dry-cleaning businesses…” 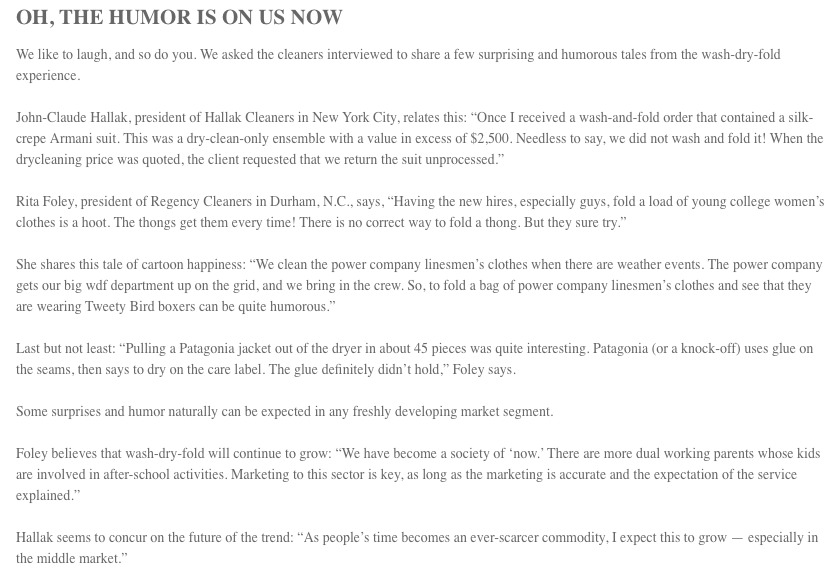 Before attempting to clean window treatments yourself, please review this helpful article on fighting drapery shrinkage.  When in doubt, leave it to the professionals.

Hallak Cleaners requesting your help in a community clothing drive.

BergenCounty.com takes a look at our comprehensive list of services.

Caring for a Special Member of the Family

Peachy Deegan’s Choice in Care for Her Wardrobe

December 2012. Peachy Deegan trusts us to keep her sweaters looking their best.

December 2012, Peachy Deegan interview John-Claude on everything from family life to fabric care tips.  Much like Whom You Know overall, there is a little bit of something for everyone.  If you live in Manhattan, you should be visiting Peachy’s page regularly. Thank you Peachy!

Bridals by Roma, you can call on us

June 2012. On the first page of The Bergen Record’s Better Living section, you can read about a special bride who walked into our store.

December 2011, Our bridal consultant speaks with the WedAlert’s Network Pretty Clever Bride regarding our pre and post wedding services.

Get Married Magazine’s “How To…” Blog

September 2011, Information blog regarding removing a stain from your wedding gown!

Get Married Magazine’s “How To…” Blog

August 2011, We offer some helpful information and tips for brides regarding what to do with the gown after the Big Day.

July 13, 2011, Ellen Wilkowe of The Bergen Record  discusses fabric and leather care with the Hallaks.

Whom You Know…Another Visit, Another Success

April 25 2011, Whom You Know blogs her love for Hallak Cleaners again.

April 15, 2011, Whom You Know blog loves Hallak Cleaners for her cocktail dresses.

Putting the ‘green’ in dry cleaning

January 2011, Highlights Hallak Cleaners as a pioneer in the green cleaning effort.

October 27, 2010, John-Claude Hallak combined his father’s attention to detail and his own business ideas to keep the family dry cleaning business healthy.

August 31, 2009, the blog Business PR, posts the press release about Hallak’s new technology upgrade with the help of Miles Technologies.

August 31, 2009, the blog Textile Rumors, posts the press release about Hallak’s new technology upgrade with the help of Miles Technologies.

August 31, 2009, a press release described Hallak and our new improvements to our plant with IT support from Miles Technologies.

Hallak Gets Tweeted About!

August 24, 2009, Bethenny Frankel from the Real Housewives of NY just Tweeted about Hallak on Twitter. She said that she “is so thrilled with James at Hallak Cleaners on 2nd ave/64th. They work so hard and can get almost any stain out!!!” Follow Hallak on Twitter @hallakcleaners!

Hallak On The Weddingbee Blog

Hallak At The B-List

April 29, 2009, The Bridal Wishlist Blog talks about Hallak’s participation in the B-List.

Hallak And The Economy

February 13, 2009, Joe Hallak talks about how business is doing in current state of the economy in The New York Times.

January 11, 2009, Joe Hallak flew down to a fellow Leading Cleaners International member in Metairie, LA to help them recover after Hurricane Katrina. Read about the adventures of the LCI during the recovery here.

November 20, 2008 John-Claude Hallak is quoted in the article “Tales From the Couture Dry Cleaners” in the Wall Street Journal. Click here to read the article.

Hallak’s Gown Preservation Service talked about in a blog

August 11, 2008, the blog From “I Will” To “I Do” recommends Hallak’s Gown Preservation Services. Click here to read the entry.

August 21, 2008, Joseph Hallak Jr. is quoted on drapery cleaning in The New York Sun. Click here to read the article.

June 3, 2008, the Daily Sentinel in Texas ran a story on Hallak’s Gown Preservation Service written by The Associated Press. Click here to read the story. And The Canadian Pres ran the same story on June 5, 2008. Click here to see it.

May 25, 2008, Joseph Hallak Jr. appeared on ABC to demonstrate more on emergency spotting on your wedding dress on your wedding day. Click here and scroll down to read all about the segment.

Hallak News Out on the Wire

May 22, 2008, The Associated Press wrote a release about quick stain removal in which Joesph Hallak, Jr. was mentioned. Read the story here.

Hallak was mentioned in Rachel’s Handbags Blog on About.com. Click here to read the post from May 12, 2008.

Excerpt: “High-end designer bags, suedes and fancy silks really should be taken care of by an expert, as you most definitely don’t want to run the risk of ruining something special or expensive just to save a little cash … Check out this example of an Hermes that was blood spattered in an accident and saved by the experts at Hallak Cleaners, and see that all is not lost when your beloved bag has a major mishap.”

Hallak is a “green” cleaner

April 13, 2008 The Bergen Record ran a story about green cleaning in which Hallak was mentioned. Click here to read it.

April 13, 2008 The Bergen Record ran an article on hangers in which Hallak was mentioned for how we recycle ours. Read the story by clicking here.

April 9, 2008, Hallak is mentioned in an article on iVillage for Gown Cleaning. Click here to read Sample Sales: Cleaning Your Gownon iVillage.

Read about how we clean handbags in the March 20, 2008 edition of the New York Post here.

Hallak Cleaners is recognized by The Bergen Record as a distinguished couture dry cleaner. Read the full article by clicking here.

Hallak Cleaners listed on The Knot

Hallak Cleaners is recognized by The Knot as a premier cleaner of Wedding Gowns, and has placed us on its recommended list.

Spruce Magazine, a publication standard in the industry, named Hallak Cleaners among the nations ten best. Their profile recounted an incident which could also qualify Hallak as the safest. Some years ago, a client brought in an outrageously expensive Chanel bag to be cleaned. Without a moment’s hesitation, President John-Claude Hallak placed it in the store vault for safety until it was serviced. At Hallak, this kind of customer attention is par for the course, and has been since we began operations as a family-run business in 1963. What makes Hallak so special is the care and the people they employ. Unlike most cleaners with only one or two cleaning methods available, Hallak has four to satisfy the varying cleaning requirements of a cotton sweater, a beaded silk gown, an Armani suit and a leather jacket. Whereas most cleaners distill their cleaning solutions only after 4-5 uses, we distill ours after every use. And, because poor pressing is so critical to a perfectly cleaned and finished garment, we hire only the best, most experienced professionals and then refine their techniques to meet our exacting standards. We give our customers more – more advanced technologies and more qualified, caring employees.

Hallak is the recipient of the 2002 Robert Santo Environmental Awareness Award given by the New Jersey Small Business Compliance Advisory Panel, in cooperation with the New Jersey Department of Environmental Protection. Hallak is one of 2 businesses in the state to receive this prestigious award based on demonstrating exemplary environmental responsibility. We are proud to be recognized by the State of New Jersey for our commitment to the protection on our natural resources.

“Mr. Hallak prides himself on the care he gives to wedding gowns. [He] works for museums, antique shops and textile restorers, as well as private customers. He stresses attention to detail.”

“…the cleaner Turnbull & Asser recommends to its customers.”

The Best of New York-Gault & Millau

“A cleaner of the highest order.”

“In an age of impersonality and indifference, Hallak stands out.”

“Very simply one of the best drycleaners anywhere.”

Hallak Cleaners is here for you

Because your wardrobe and home deserve the very best
Contact Us